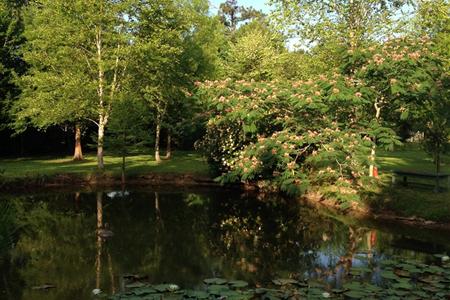 Originally there were three tung nut farms in the Folsom area.

Normandy Plantation, with 95 employees, was the largest privately owned farm.

The tung nut farms economically impacted the Folsom area from 1945 through 1965. Land was purchased by Louis Chenel in the Folsom area because the configuration of the land was close to that of Normandy, France and its close proximity to the cultural center of New Orleans. Land sold for $6.25 per acre in 1942-43. The Great Southern Land Company had previously clear cut the land and sold the virgin pine trees for resin.

The Folsom countryside was open range and the first fences were put up by the tung nut developers. In order to prevent erosion, the land was terraced by the Louisiana Extension Service. At Normandy Plantation one thousand acres were cultivated. The nut of the tung nut trees, which originated in China, was used for lacquer, paints and varnish. The tung nuts were harvested from October through March. Since the leaves buried the tung nuts, the workers known as pickers, located the nuts under the leaves, picked them up, and placed them in hampers. Full hampers were dumped into a sack and hung in a tree. A checker reviewed the area and counted the sacks. A picker was paid ten cents per hamper and could harvest 50 to 70 hampers per day. At the end of the day, the sacks were collected and transported to a storage bin. The tung nuts were processed by crushing and steaming out the oil in mills located in Bogalousa, Franklinton and Picayune. The plantations were paid according to the number of tank cars filled with oil.

The tung nut industry suffered several major setbacks. Beginning in 1955, there were four years of consecutive freezes and hurricane force winds hit the trees destroying the crops. Lack of protective tariffs allowed tung oil to be imported from Argentina and tung oil paints were being replaced with acrylic paint. Tung nut production was no longer profitable.

On Normandy Plantation, experimental loblolly pine trees were planted in rows to facilitate the cutting of the property. It was thought that the trees would grow fast and produce lumber. Further diversification resulted in the first eight hundred acre development of Merrywood Estates, which was named after an estate in New York. The streets were named after members of the Chenel family and provinces in France.

Cecil Ross was the first resident of Merrywood Estates in June 1964. Ponds were dug in Merrywood for road fill and low area development. Merrywood property was gradually sold over the next 20 years and Folsom businesses grew as Merrywood developed. The economic base of the Folsom area was directly influenced by the tung nut farming and land development. (Oral History from Denise Chenel )

In 2005, Merrywood Estates and the entire South Louisiana & South Mississippi region was hit by Hurricane Katrina.  Many people had fled the low lying areas of Louisiana and Mississippi to stay with relatives on "The Hill" as Merrywood has been traditionally known to the locals.  While many, many miles from the Gulf of Mexico, the hurricane winds caused Merrywood to sustain massive tree loss.  The community pulled together to a heroic level as neighbor helped neighbor come to grips with the catastrophic regional event.

In the aftermath of Katrina, the electrical grid was tremendously improved by Washington-St Tammany Electric and water lines replaced by Lee Rd Water. The Katrina event proved to be an experience of endurance that built camaraderie and fellowship between neighbors.

When visited months later by a public official the remark, "of all the areas impacted by Katrina with the exception of those that took water, your community was the worst hurt - but you people of Merrywood handled your own problems!" (paraphrased)